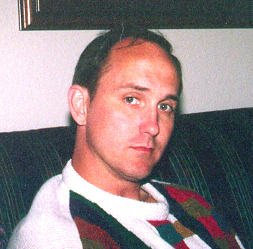 I'm writing this, not as one who has finished the journey to freedom over sin, but as a man who faces trials and failures every day of his life. I've learned a great many things since I have faced my sexual addiction. Perhaps the most difficult lesson has been learning to deal with my failures. I don't consider the issue of sexual addiction one I can turn my back on. I feel like a character from a western novel who never sits with his back to the saloon doors. My victory over this ugly sin has spanned mere months. When those months turn to years I may develop a different view.

I've traveled such a long way since coming to First Stone Ministries for help. It's not just sexual issues that have been overcome since that day nearly two years ago. My walk with God was shallow and unimpressive. Days - no, weeks - would go by before I'd have any real spiritual time with my Savior. I was coasting and I couldn't see the increasing distance between myself and God. How often we fall to the subtlety of Satan rather than to his bully tactics. "Be self-controlled and alert. Your enemy the devil prowls around like a roaring lion, looking for someone to devour." (I Peter 5: 8-9). Have you ever watched a lion on the hunt. The unsuspecting victim is busy filling its stomach with leaves or grass. Too engrossed to stop what he's doing to notice the tale-tell signs of approaching danger, he will pay the price. How does the lion attack? Does he roar and charge head on from two miles away? I'm learning more and more to see those fields of tall, luring grass that lie off from the path I must walk. For if I stray from the my path I risk being devoured by the lion as he lies silently beneath the grass, waiting.

Like so many others, I was a child when the seed of sexual addiction was planted within me. My father loved me very much, but his own addictions led him to introduce me to pornography and masturbation. Once the seed of corruption was planted Satan nurtured and watered it through the worlds system. When I became a young man I left home and joined the Marine Corps. I was stationed for four years in Southern California. Drug dealers, strip bars, peep shows and hookers littered the streets outside of Camp Pendleton. My time and money went towards staying high and feeding my sexual addiction. I couldn't identify my sexual perversion as a problem. You see, the world may give lip service to drug abuse, but no such concern is directed to ungodly sexual behavior. Since I didn't have God to guide and advise me I was left to seek happiness as the world advertises it. Looking to the world for moral guidelines is like going to a dermatologist who thinks band-aids are a cure for leprosy.

Pornography's hold on me grew stronger as I grew older. The effect this had on my sexual life was always obvious to me, even when I was unable to see it through the eyes of the Holy Spirit. One effect it had on me that I was unable to see until I was well on my way to recovery was my inability to be intimate with others. Godly sex is an extension of the intimacy between a husband and wife. Worldly sex is a perverse, destructive form of self-gratification. I remember sitting in Stephen Black's office one evening when he said something that opened my eyes. He told me that whenever we sin sexually we're hurting our very souls. I Corinthians 6:18 says, "Flee from sexual immorality. All other sins a man commits are outside his body, but he who sins sexually sins against his own body." The way we treat others is a mere reflection of how we feel about ourselves. When we allow sexual sin to pollute us we're damaging our image of ourselves to the point where we may loose sight of who and what we are in God's world. If we aren't able to see ourselves as God does then we can not react to others in a true spirit of love.

You would have thought that when I asked Jesus Christ to come into my life I would have instantly been cleansed from all my sins. Actually, in one sense this did occur. "And this is what some of you were. But you were washed, you were sanctified, you were justified in the name of the Lord Jesus Christ and by the Spirit of our God." (I Corinthians 6:11). We are instantly washed by the blood of Christ at the moment of faith. Being transformed into the image of Jesus on earth (sanctified), however, is a gradual process. I used to daydream that God would appear in the midst of my troubles and shoot me with His "Acme Holiness Ray-gun". I now see God's wisdom more clearly than I did in those days of Warner Brothers cartoon fantasies. The painstaking method of sanctification has added strength to my walk with God that quick fixes could never have accomplished.

There is nothing as important in recovering from sexual addiction than our walk with god. Yet so many sincere Christians are trapped in this habitual sin. "Brothers, if someone is caught in a sin, you who are spiritual should restore him gently. But watch yourself, or you also may be tempted. Carry each others burdens, and in this way you will fulfill the law of Christ." (Galatians 6:1-2)

God never intended us to be spiritual islands. Yet one of the destructive elements of this sin is that it isolates us emotionally. Before anyone can climb out of the pit of sexual sin they must reach up and grab the hand of another. I believe one of the greatest holes to be filled in the body of Christ is the shortage of laborers in the ministry of sexual recovery.

Brokenness is a prerequisite to spiritual victory. Taking the time to find First Stone Ministries, and keeping that first appointment with Stephen Black, was an extension of my brokenness. I had lost my wife, I was afraid of passing my sin to the next generation, and I felt a million miles from God. But once I made that first contact I was on the road to sexual freedom. God will deliver each and everyone of us from the sin that entangles us, but we must keep our end of the bargain. I'm reminded of the story of the slow-witted farmer who purchased a chain-saw. "This beauty's guaranteed to cut down 40 trees a day", the salesman boasted, "or we'll give ya' your money back." "I'll take it", he replied. And moments later he was driving home with his new purchase. One week later, however, he was back in the store. "This thing don't work", he complained, "I've been workin' my tail off and I ain't able ta' bring down more than five trees a day." The salesman frowned at the saw. Then he took it and pulled the starter cord. Hearing the chain saw roar to life, the farmer jumped back in shock and exclaimed, "What's that!" How often do we fail to use the power of God in our lives. I now realize, several years into my journey to sexual freedom, that my relationship with God ultimately enabled me to overcome my habitual sin. That may sound too easy to some, but like the slow-witted farmer we tend to get it wrong never-the-less.

Prayer, reading the word of God and scripture memory have been the key disciplines to my building a powerful relationship with God. Freedom didn't occur over night. The times I fell back into my sin were too numerous to count. Yet each time I did fall I got back up and turned to God. Continuing in God means not giving up. It means really wanting to put God first and the world behind us. "When Jesus saw him lying there and learned that he had been in this condition for a long time, he asked him,'Do you want to get well?'" (John 5:6) I never realized it until after the facts, but I didn't have complete freedom over sexual sin until I truly wanted it. How often do we hear someone say they'd do anything to be free of a particular sin? But are they willing to put God first and the world behind them? Like so many things in life the answer to our problem is easy to understand but hard to practice. That's because choices are made on 10% knowledge and 90% determination. Just as intellectual acceptance differs from true faith, true freedom over sin is a world away from lip service to the same.

I will never be the same since that moment I walked into First Stone Ministries like a wounded puppy, ready to face my sin. It wasn't until I was well into my journey that I began to mature in my walk and experience victory. This journey will never end until Christ returns, and I'm glad for it. There are more meaningful endeavors than returning to the Egypt of our lives. That's right, I don't plan on bowing to Pharaoh ever again. I want to be where the presence of God shines, even if it means 40 years in the wilderness.

There is a tale about Abraham Lincoln before the Civil War. He happened upon a slave auction and noticed from the crowd the object of the next sale. A beautiful young black woman stood on the auctioneer's stage. The bidding started and the men in the crowd began raising the price one after another as they appraised her with cruel stares. But with each bid Abraham Lincoln would raise it one dollar higher. As this continued the young slave girl eyed the tall awkward man with a look of suspicion and fear. Finally the last bid was made, and it fell to young Lincoln. Lincoln paid the auctioneer and the slave girl was brought to him. "Remove her chains", he ordered her former captor. The girl rubbed her wrists and glared at her new master with uncertainty. "What ya' goin' ta' do wit' me now", she asked. "Why, I'm going to sit you free miss", he answered. "Free? What you mean, free?" "I mean you are a free person. You are no longer a slave." Ya' mean I can do whatever I want?" she exclaimed. Ya' mean I can go anywhere I want?" Abraham Lincoln just smiled and nodded his head. "Then I want to be wit' you!" she shouted. He looked down at her, puzzled. "You can go anywhere. Why would you want to follow me?" "Cause I wanna be wit' the one who set me free." When God set me free from sexual sin it was more than just a case of my overcoming a stronghold in my life. It was a renewal in my walk with God. It is the realization in my heart that I want to follow the one who has set me free.