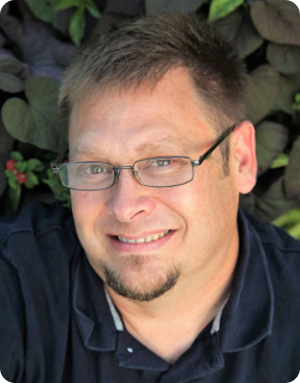 "I wish I could tell you" was the thought that came to me about the horror I was experiencing at the hands of the last man to molest me. I looked at my dad as he slept in his recliner, oblivious to the secret double life I lived right under my parent's noses. My story begins somewhere around the age of 4, having been introduced (by whom I do not remember) into a world of sexual play and masturbation. Over the years I would come in contact again and again with boys and girls who experimented sexually. As I got older, it became babysitters, mostly male. I experimented with every one of them except one girl who was smart enough to figure out that my boasting at 9 years old was not the product of a vivid imagination. When I was eight, my father took me to work with him, and to keep me occupied, gave me a pornographic comic book that fueled an abnormal curiosity and sex drive that was only intensified by his secret stash of pornography that I had found. This porn was the impetus for me to approach one female babysitter and ask her to do what I saw in the magazines. Unfortunately, she was willing to fulfill my requests. It was of this relationship with my sitter that I boasted to the newest babysitter who caught on that something was wrong and reported it to my parents. My parents sat me down and assured me that I wasn't in trouble; they were not mad at me; I would not get punished. They just wanted me to tell them the truth, so, I did... and I got punished. That betrayal led to a deep mistrust of them and six more years which brought the worst experiences of molestation and sexual abuse from many pedophiles.

If there was a pedophile within 20 miles of Oklahoma City, I found them. I never had to go looking because they were everywhere—in bookstores, in parked cars, in bathrooms, at the public pool. I was largely unsupervised by my parents, which enabled me to be in the places where I knew an encounter would inevitably take place. By the time I was 13 or 14, I was so well trained by many men twice and three times my age. I had no identity except the one given me by my abusers. I was the perfect victim—young, pretty, and receptive.

Growing up, I had no real relationship with my Father outside that of continually offending him because I never could do anything right in his opinion. I was sensitive, artistic, musically gifted and creative. My Dad was a “good ol’ boy”—a self-taught man who had himself been abused at the hands of his stepfather. My mother was a woman who never knew her real father in any capacity, having been separated from him in infancy. She was molested by her stepfather and felt insignificant in her own family.

Our family life was disjointed and disconnected. Like a play with no plot, we had our roles to play: my father was the breadwinner; my mother was the fantasy fueled by pornography; and, I was the other person that lived in the same house.

Around 12 years old, I concluded that I must be gay, since all these things kept happening to me. I had my first boyfriend at age 13 which lasted long enough for me to be exposed to the gay nightclub scene. There was a club called The Warehouse, that didn't serve alcohol, so minors were eagerly welcomed. I encountered many men twice and three times my age who were all too eager to involve me in pornography and sex. When my parents divorced, I was 15 and a mess. Their divorce allowed me the freedom to cut loose, to the chagrin and horror of my mother. For 2 more years, I made her life miserable to the point that she felt numb.

When I was 17, my mom met a man whom she agreed to marry, and she planned to move to Nebraska with him. I was in a good school, and I was doing well, so I found a way that allowed me to stay and finish my last year of school. It was during this time, that the lady who took legal guardianship of me got saved. Linda was the mother of a gay friend of mine. I plotted with him for us to live together with his mom. I was employed at a local TG&Y (kind of like Walmart.) One night, while working in automotive, I helped a lady look for an air filter and felt compelled to boast to her about my homosexuality. She responded with kindness, gentleness, sincerity, and boldly told me about the word of God. I had never heard the word of God before on this subject and, when I went home, I rubbed my chest at the center of my being because I felt a sensation there from our conversation. I knew something had happened when she shared with me what God's word said.

Shortly after that, I came in contact with Stephen Black. His parents were friends with my parents, and he happened to live just down the street from where I worked. Again and again I would encounter this man, at times wondering if he was following me because I would seem to run into him frequently and at the oddest times and places. 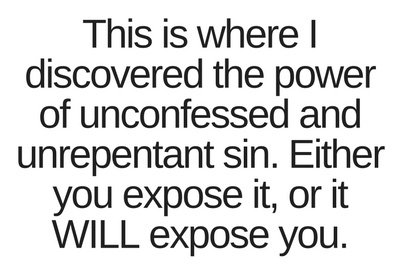 One Saturday, after having recently watched The Exorcist while drinking and smoking pot, I had dreams that I was begging demons to come into me. At work the next day, I was depressed and ready to die. I didn't want to live. The friend I had watched the movie with stopped by. I had a break coming, and I desperately wanted to get out and get some air. We had a plethora of choices for the small break time I had, and yet we drove down the road to a Taco Bell. As I came in the door, I saw Stephen Black! Instantly I heard a huge Yes inside me and I rushed over to him, pestering him with question after question, knowing he was put there for me. Later, Stephen recalled that he had been mowing the yard and kept hearing a voice saying, “Go to Taco Bell.” What an amazing God! That night I asked Jesus to come into my life at Stephen’s home.

I got married, had two children, yet I was unhappy. I wasn't in love with the woman I married, and I had an emptiness I couldn't explain. I went into the military shortly after we married, and I never had trouble finding other men with same-sex attractions. My marriage fell apart, and eventually we separated. My wife found a same-sex partner, and I was in and out of both church and a gay life. Again, I found my life a complete mess. In pursuit of ultimate fulfillment, I re-embraced homosexuality, and spent everything I had to find fulfillment in homosexuality, losing my children and my dignity. I never had money because it was all spent at the bars looking for love and fulfillment. I rarely had the same partner twice. I tried "monogamous" relationships, but failed. I was never a faithful partner, and I always knew that what I was doing was sin. I found that the more desperate I was to be free, the more bound I seemed to become. I was constantly overcome with loneliness and depression. I would make feeble attempts at walking away, but failed each time. But, something began to happen. I would come in contact with people who loved God and would show me love and compassion while standing firm on truth. Never once did they bless my sin, but loved me in spite of it. There were moments I heard the soft whisper of praise music, like a lullaby beckoning me to come back. 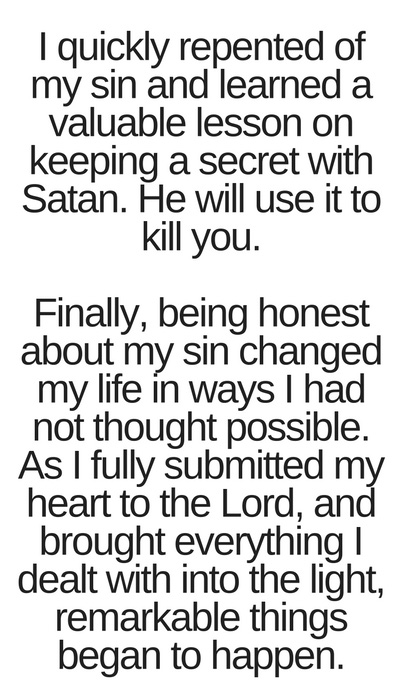 Eventually, I was at the end of my rope, exhausted and disillusioned. I cried out to God for help, and this time, I didn't care what it cost me. I had to have Him! Nothing changed, but everything changed! I became hungry for truth, devouring books by Finney, Spurgeon, Tozer, Chambers and, of course, the Bible! For the first time in my life, I said “no” to homosexuality. Following that life-changing decision, I moved several times in my quest to obtain as much healing as I could and eventually moved back to Oklahoma City to go through the Living Waters program in 2003. It challenged me in ways I never thought possible and dug up old, buried pain from the abuse. During this time, I was still struggling with pornography and wouldn’t tell anyone what I was actually doing but only alluded to it. This is where I discovered the power of unconfessed and unrepentant sin. Either you expose it, or it WILL expose you. Through a series of circumstances and abnormal reunions with my past life, I found myself again in a gay bar. However, it lasted for about two seconds when I realized that there wasn't anything about the past life that held any value for me. It was just as awful an environment and seemed worse than it ever had before. I quickly repented of my sin and learned a valuable lesson on keeping a secret with Satan. He will use it to kill you.

Finally, being honest about my sin changed my life in ways I had not thought possible. As I fully submitted my heart to the Lord, and brought everything I dealt with into the light, remarkable things began to happen. I became stronger, overcoming some of the worst battles of my life, and stepping into the true identity that God had for me since before I was born.

In 2009, I agreed to commit to First Stone ministries as a servant leader, and now - 6 years later, I am leading the Parents Group at First Stone, leading a small group in Living Waters, and officially came on staff this year. God has been amazing to me, and I am continuing to experience healing in my identity as a man and as a son. More importantly, I say with confidence, I was created for heterosexually. I identify as a heterosexual man. I believe that Jesus didn't walk on water to show us how to walk on water, but rather to show us that what is impossible with man, is possible with Jesus.

Jim Farrington is an Intern with First Stone Ministries to become a Men's Minister.  He is leading small groups and the Parent, Family and Friends group.