HANDOUT IN PDF for downloading and distribution


Prophecy of Pride Interview and Article - 2021

"In His Image - Delighting in God's Plan for Gender and Sexuality"

"This Is The Way God Made Me? - Examination of Homosexuality and the so-called 'gay gene'"

Are Sexual Orientation Change Efforts (SOCE) Effective? Are They Harmful? What the Evidence Shows - by Peter Sprigg, Senior Fellow for Policy Studies at the Family Research Council in Washington, D.C

Dr. Judith Reisman, Ph.D. - Exposes Alfred Kinsey as the evil serial pedophile that he was in having multiples of infants and children molested as part of his "studies."

(if you desire Freedom Realized or Libertad Alcanzada in another EBOOK format please send your request at the Contact Us page and fill out the form with your request.)

(Topics mentioned - much more in the HISTORY LESSON by Stephen Black)

2010 - Mark Yarhouse "White Paper" Edited by D.A. Carson, President of the Gospel Coalition to indoctrinate the embracing of "sexual minorities" for the church - "Orientation" narrative - APA gospel for the Church. 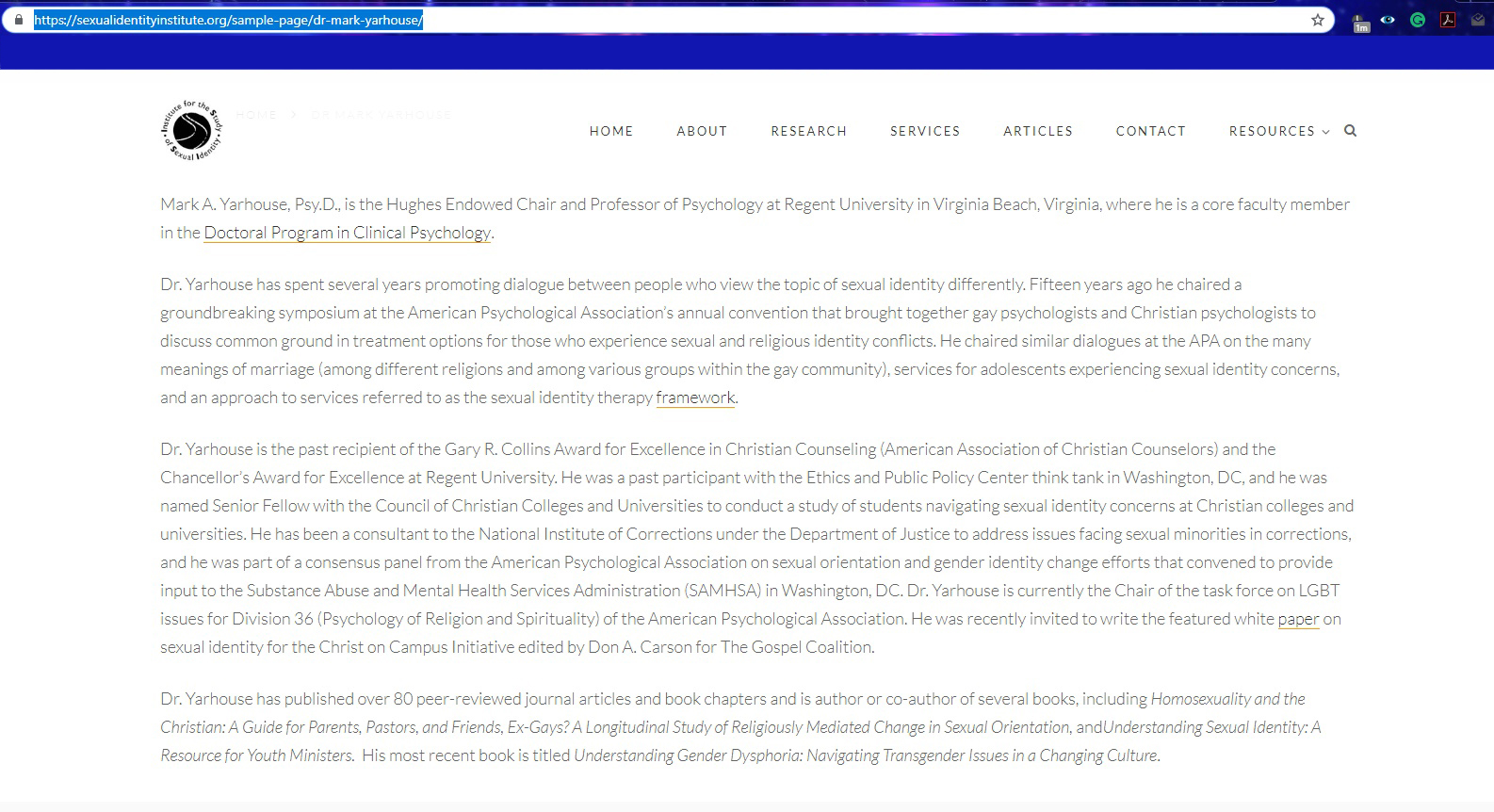 (click on the graphic of Yarhouse web, view in another tab, and zoom to read more clearly) This is revealing D.A. Carson, President of the Gospel Coalition was involved in promoting the "orientation & LGBTQ+ Christianity" & "sexual minorities" to the church - (UPDATE -- This page and website has been removed - since exposing this connection, but the graphic above is the screenshot of the website).

Since 2000 -- Yarhouse plays a part of the American Psychological Association - and promotes their "gospel" narrative of "orientation" into the church promoting LGBTQ Christianity.

(Last Decade) Living Out Ministries / Ed Shaw & Sam Allberry Ministry from England introduces the "Church Audit" to promote LGBTQ+ "inclusivity" and audit how tolerant your church needs to be! Shaw and Allberry both promote "LGBTQ+ Christianity overtly in some circles, but in other environments, they are stealth about their "gay" identification.

2018 -- This "Church Audit" is held up by Tim Keller's wife, Kathy Keller, in England, and she is communicating that this "Church Audit" is brilliant and needs to be in the PCA churches of America. WATCH Living Out Video and see KATHY IN HER OWN WORDS!  Just start watching at 00:1:30 and hear for yourself.

2014 ERLC -- The Albert Mohler connection mentions in the midst of a teaching at the ERLC – a conference devoted on LGBTQ+ issues,  that he has changed his mind on the “orientation” teaching of the American Psychological Association (APA) because if science shows us more information there must be an embracing. The idea of “orientation” (APA is what gives ground to “sexual minorities” in the Gospel Coalition, along with Sam Allberry calling himself a Celibate Gay.  2 Tim. 3:5. The erosion continues.  This is very disturbing when you see who the players are in the Gospel Coalition Council. Notice buzz words like “human flourishing” “tolerance” we must be “kind” as a manipulation for a false compassion (this comes from LGBTQ+ agenda [Human Rights Commission] for this propaganda).  I believe Dr. Mohler is a good man, but certainly is promoting the LGBTQ Christian narrative, perhaps naively. There is more troubling information. Nate Collins, the president of REVOICE was under Albert Mohler’s care for many years at Southern Baptist Theological Seminary (SBTS), and taught the LGBTQ+ inclusivity and "LGBTQ+ Christianity - although called celibate gays.  Nate Collins is the man promoting overt “LGBTQ+ Christianity” through REVOICE now which is bringing uncleanness into the church. Collins taught these ideas of LGBTQ Human flourishing while at SBTS under Mohler. See Albert Mohler’s teaching: https://youtu.be/Iq3EiToCylQ and start at: 25:00 minutes, seems like a really smart and good teaching and he then promotes the orientation narrative, at 29:00-30:30.  He “repents” of not believing in it - "orientation". There is some real ambiguity and muddying of the Gospel. Most, are not paying attention.


Comments & Questions in the discussion regarding about where J.D. Greear, President of the SBC, and where is the SBC is headed?  See for yourself:

Dr. James White reveals the breakdown on J.D. Greear on Pronoun Hospitality (Yes there is an embracing of dysfunction of God's Divine Intent of male and female, under what is called the need for a "generosity of spirit" vs. "telling the truth.")

The Failed Former President, Alan Chambers, and his pastor and board chairman, Clark Whitten of Orlando, FL, brought in "LGBTQ+ Christianity" & Corrupt Psychological belief with antinomianism (hyper-grace) and communicated no one changes. They have a powerless "gospel of orientation".  See the following:

In Alan Chambers' Own Words - Blog and Videos