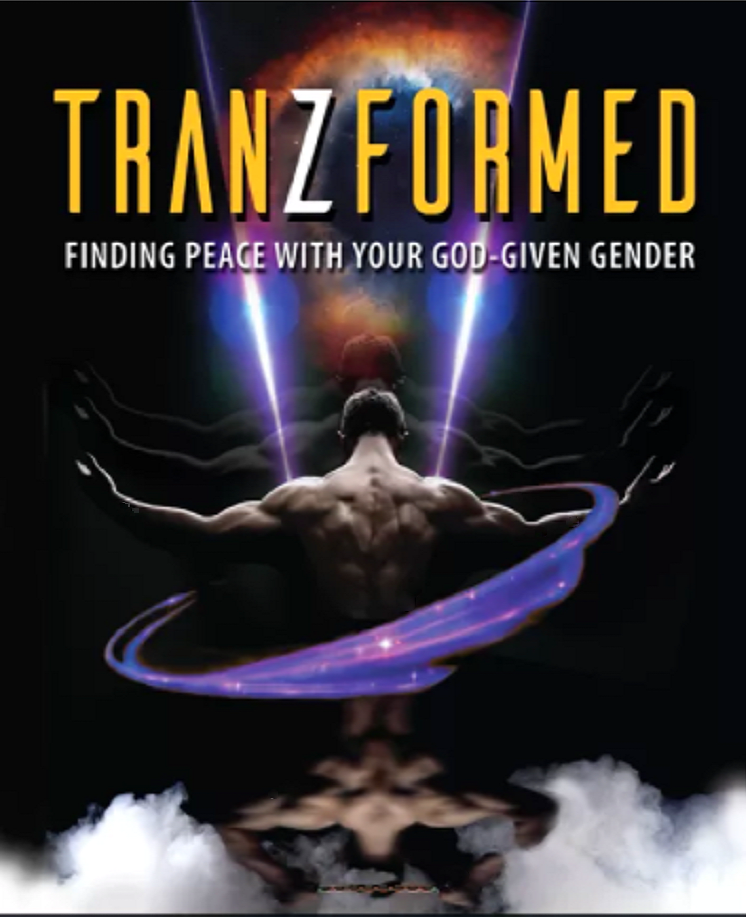 First Stone Ministries has made a decision to cancel this particular public screening of TranZformed.  We hope to reschedule after the first of the year, in 2018.

This public response is answering a false claim, some distortions and the typical fake-news narrative by those who do not hold to a conservative Biblical orthodox view of human sexuality, The Gayly and Sara Cunningham. Before going into the details of their false claims—that First Stone Ministries is offering a “soul-crushing” documentary—it is actually important to know what First Stone Ministries(FSM) is really offering.

First Stone Ministries(FSM) is honored to share with Oklahoma City a public screening of the loving, Gospel-centered and award-winning documentary: TranZformed: Finding Peace with Your God-Given Gender.  It is a Christ-exalting documentary which was produced by Pure Passion Media and Mastering Life Ministries.  The director is Karl Sutton and writer David Kyle Foster, and both have produced this amazing work. It is riveting, with truthful and raw stories from 15 transgendered individuals who gave their lives fully in complete surrender to Jesus Christ as Lord.  Subsequently, after giving their lives over to Christ, they tell their courageous stories of being compelled by the Holy Spirit to transition back to their God-given, assigned birth sex.  This transition back to their God-given birth sex came as an outcome of their individual quests to finally gain real peace with themselves and with God, their Heavenly Father. This documentary is tremendous as it is filled with scientific facts, sound theology and a Biblically informed worldview of freedom and love.  Above all, this documentary is completely the opposite of “soul-crushing” definition it was assigned as it offers real hope for those who truly want help.  The facts are in, those who struggle with transgendered identities deal with significantly higher levels of mental disorders, depression, and suicide and, statistically, the problems are the same, if not worse, after these individuals transition through hormone therapies or surgical procedures.(1)  As sincere devoted Christians, (not in name only) we must have compassion for such a destructive lifetyle and give hope.  It is at the very least tragic to call “soul-crushing” the grace of God which brings hope and change. Accusations like this are diabolical intending to take options away leaving people in self-destructive hopelessness. 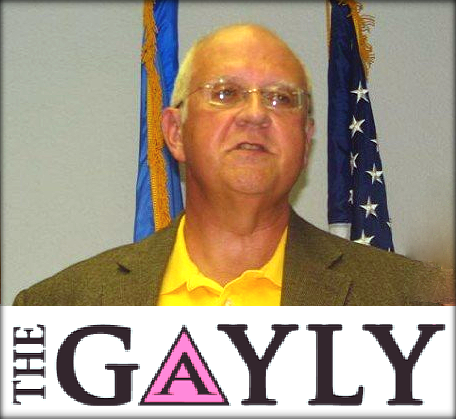 Rob Howard, Associate Editor with The Gayly wrote a story posted on October 24 based on the claims by Sara Cunningham. She claims that the TranZformed documentary is “soul-crushing.” Yet, Cunningham has not seen the entire documentary that we are providing in our public screening. She calls herself, “a Christian mother of a gay son, living in the state of Oklahoma.”  Her book blurb is: “a Christian mother comes to terms with her son being gay through a personal journey that starts with the Church and ends at the Pride Parade.”  Unfortunately for Cunningham, her son’s homosexuality caused her to re-think her worldview.  She has chosen a revisionist view of “Christianity” over orthodoxy regarding human sexuality. She must believe that to really love and have a relationship with her son, she cannot revere God’s holy Word as it is written. The Bible clearly states homosexuality is sin, and that homosexual practice potentially threatens one’s eternal life. She calls herself the “momma bear of the LGBTQ+ community” and she is present to give hugs. It is truly tragic.  We at First Stone have great compassion for parents suffering the grief over gay-identified children, but to truly love with Heaven’s love we cannot compromise the Word of God. Our Biblical resolve need not necessarily bring a breach in the family. 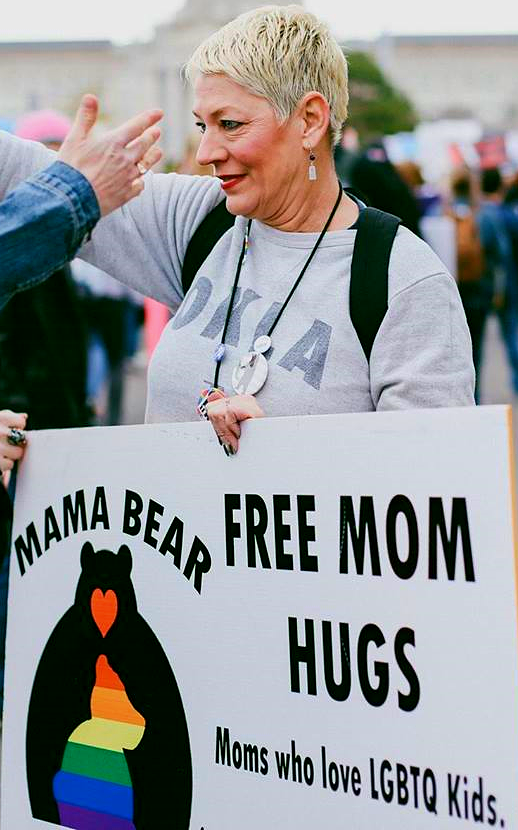 Cunningham is calling for another protest of First Stone Ministries’ and the documentary we are providing on November 3, now posturing herself as an advocate for the trans community.

First Stone Ministries had a recent encounter with Sara Cunningham.  She publicly communicated she was going to protest the First Stone Ministries Open House and my book signing, (Freedom Realized) on Saturday, October 14.  She then communicated, she was merely going to attend the event, after being repeatedly asked not to attend.  I appealed to Cunningham to set up another time to talk, she refused. Instead, Cunningham was determined to push her way through the First Stone Ministries offices accompanied by a Christian lesbian friend.  Cunningham was treated with hospitality and allowed access to our offices. Our Director of Women’s Ministries gave her the first tour of the day before leaving her and giving others tours.  Cunningham remained in our offices for about an hour before she was asked to leave as she had begun to draw attention to herself and to her personal campaign. She took advantage of our hospitality. She was only thinking of herself, and not the party or the event taking place in our offices. When anyone comes to a party to steal joy from the celebration it would be considered rude by most standards, but according to the many LGBTQ+ and their advocates who commented on Cunningham's report, she was courageous. This is a sad mindset of many in the LGBTQ+ community. They have positioned themselves as victims and then demand that the Church and others see things as they do. Cunningham communicated repeatedly to several people in our offices that the time of agreeing to disagree was over.  She made it clear that our ministry must be shut down. She also made it clear that the Church must accept and embrace gay Christians. She is referring to practicing homosexuals as Christians like her son. She has stated that she is a peaceful protestor, but her language within our offices was anything but peaceful. The days of the LGBTQ+ community speaking of tolerance and love are over unless there is complete agreement with their perspective. There is no more, “say no to hate.”  They are targeting others becoming bullies themselves. Truly Isaiah’s words are our condition today, “Woe to those who call evil good, and good evil; who put darkness for light, and light for darkness; who put bitter for sweet, and sweet for bitter! woe to those who are wise in their own eyes, and prudent in their own sight!” Isa. 5:20-21.

This is truly sad, as many well-meaning yet uninformed people are believing that First Stone Ministries and other ministries like ours are here to harm people.  The opposite is true.  First Stone is here to serve the great state of Oklahoma with the message of hope and a Gospel-centered reality of transformation of the soul. Most of our staff and volunteers bear in themselves testimonies of freedom from LGBTQ+ chaos, and are living transformed and changed lives. We are here to serve people who want our help.  Our mission is not to the gay community nor to evangelize them, unless they want help.  We are here for those in the Church who desire our help.  Christ warned of the day when those who are uncompromising of His holy ways would be maligned.  Please do not allow these protestors to distract you from coming to join us November 3 to watch TranZformed.  Let’s celebrate together Truth and the lives of fifteen transgender individuals, joined with numerous experts to dispel the confusion and bear witness to what Jesus Christ can do for those who struggle with gender dysphoria.

Please note, there will be security and police present.  All who attend this event will be required to sign The First Stone Ministries’Attendance Policy Agreement.

(1) Lawrence S. Mayer and Dr. Paul R. McHugh, "Sexuality and Gender: Findings from the Biological, Psychological, and Social Sciences, The New Atlantis, Number 50, Fall 2016 “Members of the transgender population are also at higher risk of a variety of mental health problems compared to members of the non-transgender population. Especially alarmingly, the rate of lifetime suicide attempts across all ages of transgender individuals is estimated at 41%, compared to under 5% in the overall U.S. population” (http://www.thenewatlantis.com/publications/executive-summary-sexuality-and-gender)