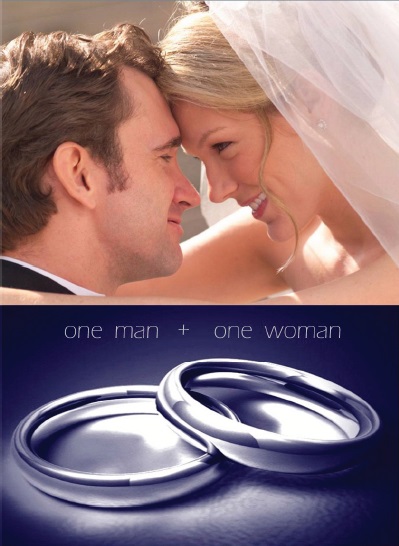 This statement was taken in part, and used by permission from the Restored Hope Network “Position on Advocating for Marriage”. First Stone Ministries, along with Restored Hope Network, upholds the original definition of marriage as understood through Scripture and the history of humanity: one man committed for one woman for the sake of the children they create and/or will influence through their marriage.

Supporting this definition has become necessary in light of recent efforts to alter it to include homosexual unions. In January of 2004, Massachusetts became the first state in the USA to legalize ‘gay marriage’; since then, activists have sought to normalize ‘gay marriage’ by encouraging court and legislative decisions, and by convincing the public that changing the definition of marriage is an expression of justice for homosexuals.

First Stone Ministries and Restored Hope Network declares that ‘gay marriage’ is no marriage at all but a counterfeit that actually promotes injustice.

We contend that marriage was designed by God and upheld by the governments of the earth to promote ‘the common good.’ That design, as revealed by nature, and described in Scripture in the creation of Eve from Adam and the reuniting of the two as one-flesh (Gen. 1 and 2), constitutes our ministries’understanding of God’s intention for marriage.1

Man needs woman and woman needs man. Neither two men nor two women can create a sexual whole; the one gender possesses what the other gender needs. In giving complementary gifts, one gender balances and draws out the other in a manner that creates a whole. Such wholeness releases ‘goods’ that benefit all, especially the children most influenced by it2. Justice for children involves one man committed to one woman for their sake.

At the center of this understanding of marriage are two people who seal their relationship with a generative act. That not only unites them but also orients them toward children. Though one need not procreate to be married, marriage is defined by the act that is essential to the creating of children.

Becoming ‘one-flesh’ unites man and woman for life; it also includes them to bring up their children together. That is why both God and state encourage norms of monogamy and
fidelity in marriage.3 Both uphold the dignity of each spouse, and of the child who needs a mother and a father in order to thrive.4

First Stone Ministries and Restored Hope Network believes that the dignity of man, woman, and child depends upon the willingness of both spouses to make and keep a vow of marital fidelity. ‘Gay marriage’ challenges such dignity by normalizing what is now described as ‘monogamish’: the trend of some same-gender ‘marrieds’ to aspire to emotional intimacy with one party but to engage sexually with others.5 In that way, redefining marriage weakens the essential boundary of sexual commitment, a distortion most harmful to the children subject to a parent’s multiple partnerships.6

We contend that the state should support the true definition of marriage. Such a definition helps promote the common good, which is justice for all. That applies to children who need both a mother and father, and to gay-identified persons who benefit from the truth that eroticized friendships can never approximate marriage. The state serves its citizens well by upholding the original intention and definition of marriage. Generations-to-come will take cues from the culture and will derive (in part) their view of marriage from its legal definition. The state’s conception of marriage matters to all.

As a Christ-centered network of ministries of restoration for persons seeking to overcome sexual problems, especially homosexual ones, RHN realizes the limits of the law. While the state can look out for the common good and restrain evil, it cannot redeem lives. Only Jesus can. Yet we realize that our fellow humanity will be impacted by redefining marriage. Legalizing ‘gay marriage’ will further damage marriage and hurt those influenced by it.

Caitlin Flanagan writes: ‘No other single force is causing as much measurable hardship in this country as the collapse of marriage.’7 Redefining marriage contributes to this collapse and will result in more human brokenness, especially in the lives of children who are subject to adult moral decisions and the laws that influence them.

We thus refuse to acknowledge the validity of ‘gay marriage’; it does not originate in God’s design for humanity but in a misbegotten justice that disrupts the common good.

Corruption begins with a failure to call things by their proper names. ‘Gay marriage’ is a misnomer that citizens of the state and church would be wise to refuse. Marriage belongs only to one man committed to one woman for the good of all.

First Stone Ministries and the Restored Hope Network also realize that ‘gay marriage’ is a symptom of the heterosexual immorality that preceded it: extramarital sex, adultery, pornography, divorce, and abortion, to name a few. We contest whatever is hostile to marriage. Our pastoral efforts to restore those broken by sexual sin are the foundation for our social policy on marriage.8 We are committed to make every effort to ensure the integrity of this most important relationship.

Transformation of Persons with Same-Sex Attraction: Becoming Who We Are